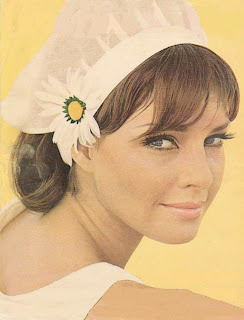 Here is a lounge song chosen to underline the glamorous beauty of Jennifer O'Neill.

Jennifer O'Neill (born in 1948 in Rio de Janeiro, Brazil) is an American actress, model, author and speaker, known for her role in the 1971 film Summer of '42 and as a face of CoverGirl cosmetics starting in the 1970s.
In 1962, she was discovered by the Ford modeling agency and put under contract. By age 15, she was gracing the cover of Vogue, Cosmopolitan, Seventeen and other magazines.
An accomplished rider, O'Neill won upwards of 200 ribbons at horse show competitions in her teens. She attended New York City's Professional Children's School and the prestigious Dalton School in Manhattan. Later, she moved on to films and worked in a number of television movies and series.
In 1968 O'Neill landed a small role in For Love of Ivy. In 1970 she played one of the lead female roles in Rio Lobo starring opposite John Wayne.
She is most remembered for her role in the 1971 film Summer of '42, where she played Dorothy Walker, the young widow of a pilot shot down and killed in World War II.
O'Neill continued acting for the next two decades. She appeared in The Carey Treatment (1972), Lady Ice (1973), The Reincarnation of Peter Proud (1975), Lucio Fulci's cult movie The Psychic (1977), Caravans (1978), A Force of One (1979), Scanners (1981), and The Cover Girl Murders (1993 made-for-television film). She went to Europe in 1976 and worked with Italian director Luchino Visconti, appearing in his last film L'innocente (1976), where she played the part of the mistress, Teresa Raffo.
In 1982, O'Neill starred in the short-lived NBC prime time soap opera Bare Essence. She portrayed a role previously envisioned by actress Linda Evans in the miniseries that the soap was based on. Her other credits include singing in the Chrysler Corporation commercial "Change in Charger" that represented the end of the Dodge Charger in 1975. In 1984, she played the lead female role on the CBS television series Cover Up.
O'Neill is also listed in the Smithsonian Institute's National Museum of American History's Center for Advertising History for her long standing contract with Cover Girl cosmetics as its model and spokesperson in ads and television commercials.
In 2004, O'Neill wrote and published From Fallen To Forgiven, a book of biographical notes and philosophical thoughts about life and existence.
O'Neill continues to be active as a writer working on her second autobiography CoverStory, an inspirational speaker.
O'Neill works for several charitable causes. In addition, she remains actively involved with her childhood love of animals and horses.
Enjoy Jennifer O'Neill's great beauty!