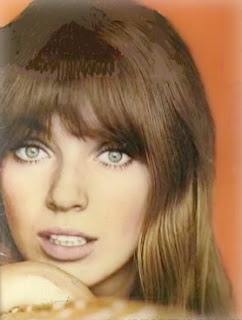 Here is a lounge soung chosen to enhance the delicate beauty of actress Joanan Shimkus.
Joanna Shimkus, Lady Poitier (born in 1943), is a former Canadian actress and is married to Bahamian-American actor and diplomat Sidney Poitier.
She was born in Halifax, Nova Scotia, to a father of Lithuanian origin and a mother of Irish descent. Her father worked for the Royal Canadian Navy. She attended a convent school and was brought up in Montreal, Quebec. She went to Paris at age nineteen, where she worked as a fashion model and soon attracted the attention of movie people on the lookout for new talent.
She made her debut in 1964, in Jean Aurel's film De l'amour. She was then noticed by film director Robert Enrico, who selected her to appear in three of his films: Les aventuriers (1967), opposite Alain Delon and Lino Ventura, Tante Zita (1968) and Ho (1968).
She also appeared in Joseph Losey's film Boom! (1968), opposite Elizabeth Taylor and Richard Burton, and The Lost Man (1969), opposite Sydney Poitier. Her film career continued until the early 1970s, one of her last notable screen appearances being in The Virgin and the Gypsy (1970).
She married Sir Sidney Poitier in 1976, and they have two daughters.
Enjoy Joanna Shimkus' grace!