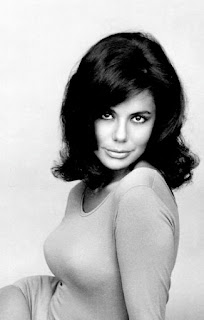 Giorgia Moll (also known as Georgia Moll or Georgia Mool, born in 1938) is one of the many beauties discovered by the Italian cinema in the 1950s and 1960s. Her harmonious face, her perfect brown hair and her dream measurements made her a star early: she was only seventeen when she was hired for her first film Non scherzare con le donne (1955). Two of her roles stand out: Phuong, Audie Murphy's Vietnamese love interest in Joseph L. Mankiewicz's The Quiet American (1958), filmed in Rome in 1957; and Francesca Vanini, the secretary of authoritarian film producer Jack Palance in Jean-Luc Godard's Le mépris (Contempt, 1963, with Brigitte Bardot). She has played in several B-movies, such as The thief of Bagdad (1961, with Steeve Reeves and Hedy Vessel) or Tom Dollar (1967, with Erika Blanc).
During this period, Giorgia Moll was also a popular singer. After 1970, her appearances became sporadic and she retired for good in 1985. She is now a photographer.
Enjoy Georgia Moll's great beauty! 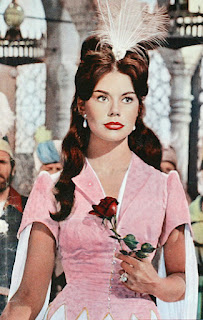