Here is a delicate song, chosen to enhance the beauty of cult Italian actress Hedy Vessel.
Hedy (or Edy) Vessel was born Edoarda Vesselovsky in Trieste in 1940. She began her career as a model and a revue dancer. She was chosen by the director Mario Mattoli to play in his 1959 film Guardatele ma non toccatele, with Ugo Tognazzi and Johnny Dorelli. She appeared in a dozen of movies (among which Risate di gioia, by Mario Monicelli, with Anna Magnani and Totò, 1960; Il ladro di Bagdad, with Steve Reeves and Georgia Moll, 1961; Psycosissimo, by Steno, with Ugo Tognazzi, 1961; La guerra di Troia, with Steve Reeves, 1961; Il dominatore dei sette mari, with Rod Taylor, 1962; Rocambole, by Bernard Borderie, with Channing Pollock, 1963), her last one – last but not least – being Fellini's 8½ in 1963, after which she quitted the cinema business, married the businessman Camillo Crociani, then the count Pierluigi Vitalini (her daughter Camilla is married to Carlo di Borbone-Due Sicilie, pretendant to the throne). Although her career was too short, she still has fans!
Enjoy Hedy Vessel's glamour! 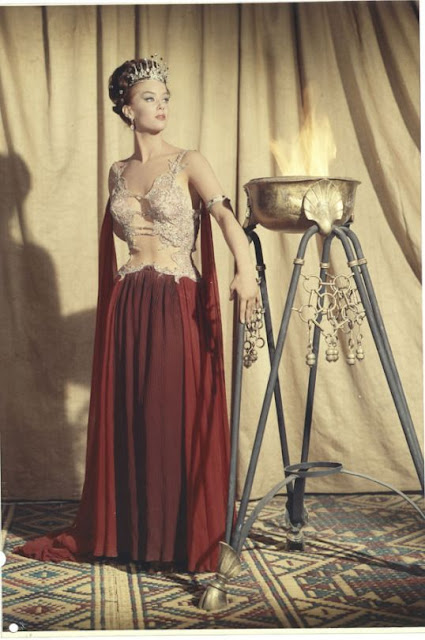