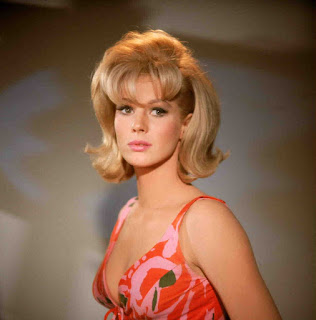 Here are two sweet songs, chosen to illustrate the beauty of cult actress Mimsy farmer.
Mimsy Farmer (born Merle Farmer in 1945 in Chicago, Illinois) is an American actress. Her nickname came from a line in Lewis Carroll's Jabberwocky: "All mimsy were the borogoves".
Farmer played in "Spencer's Mountain" (1963) and "More" (1969), the first feature film with a Pink Floyd soundtrack.
After a brief film career in the United States, mostly portraying "party-girl" types in films such as "Hot Rods to Hell" (1967), "Riot on Sunset Strip" (1967) and "The Wild Racers" (1968), Farmer moved to Italy. Most of her career has been spent in Europe, including some giallo movies with Dario Argento. She played namely in "Road to Salina" (1970), with Rita Hayworth, in "The Master and Margaret", with Ugo tognazzi.
Since 1992 she has worked as a sculptor for theatre and opera in France and Italy, and for films (Art Department) such as "Oceans", "Troy", "Charlie and the Chocolate Factory", "Marie Antoinette", "Five Children and It", and "The Golden Compass".
She also creates personal sculptures and paintings.
Enjoy Mimsy Farmer's so delicate beauty!