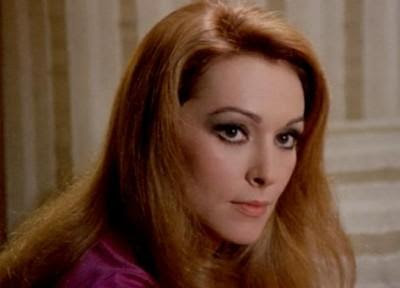 Here are two lounge songs, chosen to enhance cult actress Susan Scott's beauty and elegance.
Susan Scott, born Nieves Navarro García in 1938, is a retired Spanish-born Italian actress and fashion model. Navarro worked extensively in Italian cinema appearing alongside actors such as Totò and Lino Banfi in the 1960s and 70s. She later adopted the Americanized stage name Susan Scott for many of her productions after 1969.
Navarro was also one of the first female stars of the Spaghetti Western genre making her feature film debut in A Pistol for Ringo and its sequel The Return of Ringo along with later appearances in The Big Gundown (1966), Long Days of Vengeance (1967), Light the Fuse... Sartana Is Coming (1970) and Adiós, Sabata (1971). Nieves also had leading roles in a number of action and horror films during this period and was among the protagonists of the film Death Walks At Midnight (1972), directed by Luciano Ercoli. In 1972, she married to him, starring in many of his productions up until the early-1980s, and was familiar for her erotically-themed roles in giallo and sex comedies. It was the giallo and erotic genres that highlighted her as a major star especially her appearances in Ercoli's Forbidden Photos of a Lady above Suspicion (1970), or Emanuelle and the Last Cannibals (1977) and Emanuelle e Lolita (1978), directed by Joe D'Amato and Henri Sala respectively. She went into semi-retirement after 1983, making two last films in 1989. In recent years, she has returned to live in her native Spain with her husband.
Susan Scott played in nearly forty movies and proved that she was gifted as well for comedy as for drama.
Enjoy Susan Scott's class and beauty!